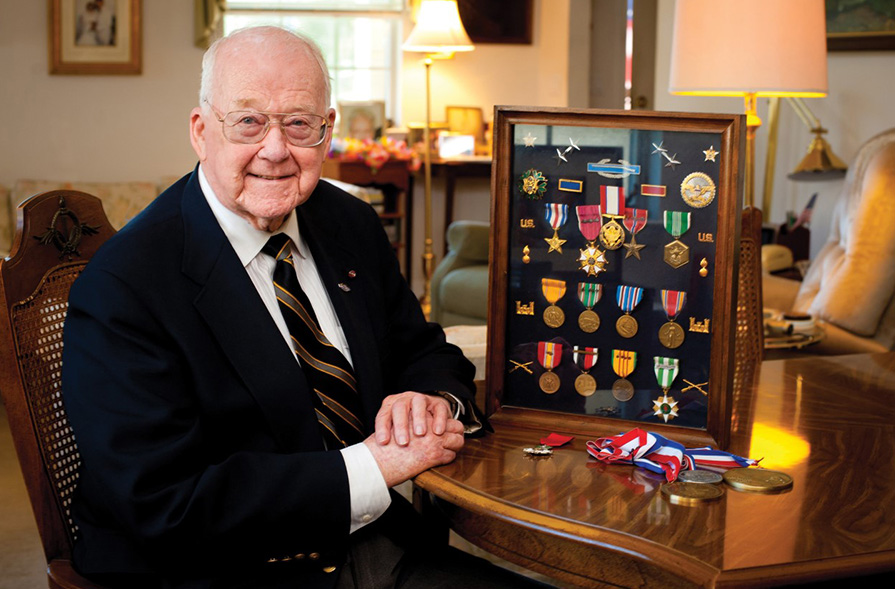 Sixteen million Americans served in the Second World War, but researchers estimate that just over one percent of those men and women – about 168,000 – are alive today. These members of the “Greatest Generation,” who fought in one of our nation’s most defining wars, are themselves becoming history.

As memories fade, we stand at the end of an era. But many have stepped up to the responsibility of sharing and preserving those stories and experiences – and among them is Mayflower resident and retired U.S. Army Ranger, Major General John C. Raaen.

A centenarian, Raaen is one of an even smaller group of Veterans. He not only served in the war, but fought in the historic D-Day invasion, when 150,000 Allied soldiers invaded a 50-mile stretch of coastline in Normandy, France.

Then a captain, the 22-year-old Raaen was tasked with leading his troops to take a battery of guns at the heavily defended Pointe du Hoc. However, casualties onshore were heavy, and the battalion’s commander changed course. He ordered their group to land further down the coast, using the breaking waves as cover.

It was a decision that likely saved Raaen’s life. More than 9,000 Allied soldiers died in the initial attack on the beach, inspiring the site’s later nickname: “Bloody Omaha.”

As gunfire rang out overhead, Raaen and his troops pressed inland, making their way around minefields, and climbing steep terrain. From Normandy, they continued fighting into Brittany, then through Luxembourg and Belgium, where they joined the Battle of the Bulge in December of 1944.

After the war, Raaen was awarded the Combat Infantryman Badge and the Silver Star, the military’s third-highest honor for heroism in combat. But his military career didn’t end there. He served in the Vietnam and Korean Wars and was promoted to the rank of Major General before retiring in 1979.

As of 2022, only 2,500 of the original D-Day Veterans survive, according to estimates from the Department of Veterans Affairs. The youngest of them are now in their mid-nineties, and many – like Raaen – have already celebrated their 100th birthday.

While Raaen doesn’t enjoy dwelling on the memories of war, he is acutely aware of the importance of sharing his experiences with the next generation. He has spoken at memorial ceremonies at Normandy, been interviewed by more than two dozen war historians, the BBC, and the Smithsonian channel, and published INTACT, a written account of the 5th Ranger Infantry Battalion’s role in D-Day.

On Veterans Day, we honor the courage of all men and women who have served our nation. But it’s also a time for remembrance: sharing the hard-bought lessons of the past, recognizing the sacrifice of those who lived through it, and doing our part to keep history alive for generations to come.