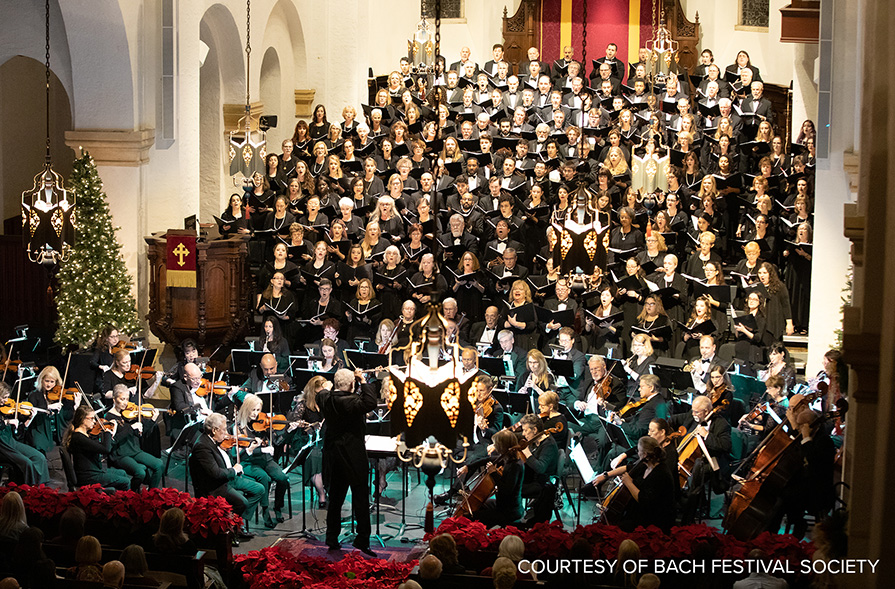 Growing up in New York City, Michael Kakos had plenty of opportunities to appreciate classical music at a young age – and after more than four decades living in London, he and his wife Aimee grew accustomed to having a “cultural banquet” close to home.

So, when the couple moved to Winter Park in 2000, they were impressed. “Winter Park may be a city of 30,000 people, but we’ve got three world-class museums, excellent theaters, and outstanding music, opera and ballet – much of it only a few miles away,” says Michael.

The Kakoses, who are currently part-time Mayflower residents, also found numerous cultural events at nearby Rollins College and began attending concerts on campus, impressed by the “wonderful array of musical talent.” Michael soon joined the board of the Bach Festival Society of Winter Park, which was founded in 1935 at Rollins and is Central Florida’s longest-running performing arts organization.

The Bach Choir’s international reputation for excellence has led to several European tours, with concerts in such august venues as London’s Royal Albert Hall and St. Peter’s Basilica, among others. Most recently, the group was selected by London’s Royal Philharmonic Orchestra to collaborate on Beethoven’s Symphony No. 9, which was performed this past January at the opening of the new Dr. Phillips Steinmetz Hall.

Rollins and the Bach Festival Society have a long history with The Mayflower, providing a variety of guest programs and performances – ranging from vocal and piano recitals to acoustic and jazz ensembles.

“We love the people at The Mayflower; we have a very active, very extensive partnership – and the benefits go both ways,” says Dr. John Sinclair, professor and chair of the music department at Rollins and the artistic director/conductor of the Bach Festival Society. “We’d like people to know that we have a servant’s heart, and that we create music that engages and inspires, and serves a purpose for others.”

While Mayflower residents can enjoy world-class talent all year round, there’s still time to take advantage of the Bach Festival’s 87th season with concerts continuing through April. Outside the spring season, the festival also showcases visiting artists and choral masterworks – and for those eager to learn more about classical music, the Insights & Sounds selection combines thematic performances with educational discussions led by Dr. Sinclair.

Here at The Mayflower, we’re proud supporters of local arts organizations – and so are our residents. As board members and donors, advocates and audience members, residents like Michael Kakos and Ruth McDaniel play key roles in enriching Central Florida with culture and creativity. Read more about the partnerships that help our community thrive in the inaugural Arts Issue of our Navigator magazine.

But the advantages of Mayflower life don’t end there. To discover what sets our community apart – from our vibrant, stimulating lifestyle to our new Bristol Landing neighborhood, now well under construction – send us a message or give us a call at 407.672.1620. We look forward to hearing from you!